SYNOPSIS: „NO VANDALISM!“ was shouted by the demonstrators who took the streets of Fortaleza, Ceará. However among the crowds at the demonstrations that exploded in Brazil in June 2013, some groups have chosen for more direct methods. Labeled as „vandals“ they were criminalized by the mainstream press, even without been heard. This documentary goes to the „front line“ to shoot the confrontations and interviewing demonstrators, an attempt to find out the motivations of civil disobedience.

Refering to the massive countryywide protests in Brasil in 2013, „Com Vandalismo“ documents fractions of the dynamics that emerged during those protests in Fortaleza in the north-eastern state of Ceará. A possible ignition was the struggle against the increase of transportation costs in several cities like São Paulo, Natal, Rio de Janeiro, Goiana and Curitiba (just to name a few of them).

The demand for unconditional free public transport has been initiated by „Movimento Passa Livre“ (MPL) [5], an autonomous and horizontally organized movement whose groups are independently active in several cities since 2005. The first bigger protest organized by MPL already took place in the city of Natal in Summer 2012 and spread to other cities in the course of the following months, reaching a peak in Summer 2013, especially in June and July, where several million people hit the streets in many cities all over the country [6].

Through the struggle for free public transport popular protests of a much wider scope has been formed and articulated demands, that expresses the peoples upset, anger and determination – for a radical change of the expensive public transportation system, that negatively affects all those whose only mean of transportation is public transport, that depend on commuting for hours from the peripheries of the cities to their low-wage jobs; that impedes the peripheries and people without money from accessing higher eduction by not being in the position to afford public transportation to the university districts as part of the overall study costs – for a better public education and health care system that benefits the working class – for housing rights and self-determined housing construction – for an urban and land reform – for a radical change of the political system that is maintained by a corrupt political class – for the dismantling of the hated military police – against governmental and police repression of social movements and marginalized people and communities – for freedom of speech and freedom of personal expression [7]. 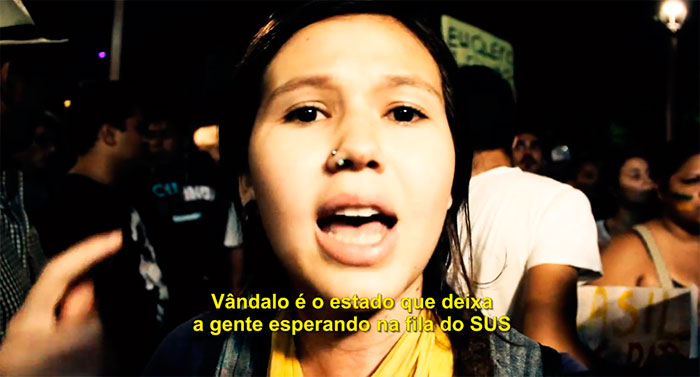 „Com Vandalismo“ analyses the governmental, mainstream press and police strategy to divide the protests and the protesters into „good“ and „bad“: the police instrumentalizes even the smallest actions of activists to justify shooting with rubber bullets and tear gas grenades and denunciates non-pacific protest as sole „vandalism“, as non-political and anti-social. The police tries to hide its very own oppressive nature by claiming to act to protected private and public property against those „vandals“. Mainstream media jumps on that train and divides protesters into those with a legitimate cause and those that just want to „cause trouble“. In that  way social struggle is weakend, as many divided and isolated groups are less strong then a mass that respects many forms and strategies of protests. „Com Vandalismo“ illustrates the tensions and contradictions between the emancipatory elements of the protests and the nationalist notions of demands.

The strategy of division has been announced by the Brasilian government at the end of 2013, particularly addressing the surveillance of „non-pacific“ social movements that would cause cracks in the image of the idyllic mega event Copa [8]. Surveillance is being accompanied by harsh police repression [9]. Several activists have been arrested in Goiana and Curitiba in May 2014 for being active in the organisation of protests against the Copa and in the „Passa Livre“ movement [10, 11, 12].

Basically, the mega events Copa (2014) and Olympic Games (2016) are drawn on oppressive grounds that are meant to criminalize dissent, social movements/struggle and the people that are living at the margins of the city and society. The pretext arguments of infrastructure improvements that are inevitably used to justify the realization of those mega events and the claimed boost of the local economy are benefiting just a fraction of society, mainly those, that are already privileged enough to afford tickets for the stadiums – while in Rio central city areas like Favelas and the port region are being completely cleaned up and gentrified, eventually leading to the expulsion of those that won’t afford to live there anymore or that are evicted, away to more remote areas [15] – while the (military) police is being equipped with better gear and weapons, is being trained in crowd control and counter-insurgency, is just there to be deployed against anyone voicing dissent.

Systematic repression against marginalized people and social movements conducted by the government, the police and private militias is a well known reality for many years. During the looming Copa, Rio alone witnessed more then 20000 families being forcefully and violently evicted [17] from the central Favelas in order to cleanup the city for the upcoming mega-events [18]. Since 2008 more then 200 of Rio’s Favelas have been occupied by 40 units of the special „pacification“ police, the „Unidade de Polícia Pacificadora (UPP) [19] consisting of more then 12000 cops. While claiming to protect the communities from drug cartels, to pacify the Favelas, to (re)establish an indefinite „public order“, the UPP itself is a violent actor accused for torturing, killing and threatening community members [20]. It is a quite contradictory claim to pacify the „margins of society“ by furthering militarization, to (re)establish a „public order“ that merely implies the state’s and parts of the public’s intentional assessment that marginalized people are not being part of society, where the state’s only „visible“ activity is ordering military police to kill drug dealers, to destroy informal settlements and occupations, or to let paramilitary squads within the (military) police arbitrarily kill community members.

Informal settlements and occupations are suffering for decades from a permanent and systematic police abuse as racist media and public discourses are labeling the predominantly dark skinned inhabitants as mere „criminals“. On the 23rd of June of 2014, the inhabitants of several of Rio’s Favelas were calling for a demonstration entitled „A festa nos estádios não vale as lágrimas nas favelas“ – „The party in the stadiums is not worth the tears in the Favelas“ in order to denounce the states daily oppression [21].

That demonstration and the wide variety of other forms of protests and actions performed since 2013 in many cities, show self-determined people that do not just accept their „fate“ but organize themselves to challenge the capitalist and neo-colonial status quo – several land occupations have been organized by landless workers movements – several buildings have been squatted by homeless workers movements – acts of resistance have been organized against evictions of occupied land – the campaign „Copa sem povo, to na rua de novo„- „Worldcup without people, we are on the streets again“ and the international campaign „Não vai ter copa“ have been started – capitalist symbols have been attacked – and countless other peaceful, non-peaceful, beautiful acts.